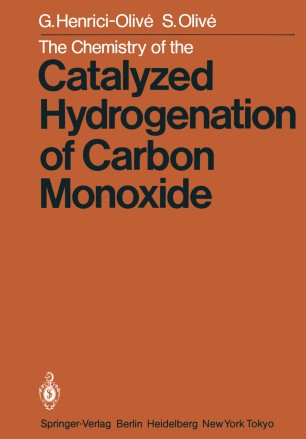 The Chemistry of the Catalyzed Hydrogenation of Carbon Monoxide

During the oil embargo, in the winter 1973174, parts of Western Europe present­ ed an almost war-like aspect on Saturdays and Sundays: no traffic on the high­ ways, no crowds at ski resorts and other weekend entertainment places, no gaso­ line at the pumps. Living and teaching then in that part of the world, and discussing the situa­ tion with our students, we came to the conclusion that it would be timely to col­ lect the fine chemistry already known at the time in the field of conversion of coal to gasoline and other chemicals, and by this way help to draw the attention to this important alternative to crude oil. The idea of this book was born. The energy shock of the early seventies has been healthy and of great conse­ quences in chemistry. Large amounts of research money have been put to work since, and our knowledge of the possibilities and limitations of coal-based chemistry has increased enormously. During several years it appeared inap­ propriate to write a monograph about a topic which was in the midst of such an impetuous development. Nevertheless, we collected, and critically selected, the upcoming work as it appeared in the literature, and also tried to provide some modest input ourselves. Now, ten years later, the situation seems to be settled to a certain degree.