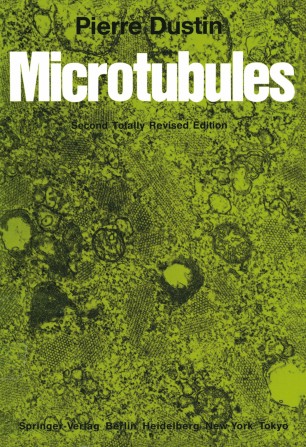 The decision, in 1975, to write alone a monograph on micro tubules was not without risks. While I was familiar from its start in Brussels in 1934 with the work on col­ chicine and other mitotic poisons, the literature on microtubules was, 8 years ago, already increasing at an impressive rate. However, this monograph, which, contrary to other works on microtubules, tried to cover the whole field of research, from the fundamentals of the tubulin molecule and the possible role of these organelles in some aspects of human pathology, to some medical applications of microtubule poisons, has been accepted as a useful tool for workers in these fields. Since 1976, (date of the last references mentioned in the monograph) until the middle of 1983, papers on microtubule research have literally been pouring in, at the rate of several hundred a year. This may justify a second edition, although the considerable difficulties in keeping the size of the book within the same limits while not forgetting to mention some important work, could not be overlooked. The need for an entirely revised and rewritten edition prompted this new venture and was possible with the help of the considerable amount of reprints kindly sent to me day after day over the years. This work would have been unthinkable if the author had not maintained the same enthusiasm for microtubule research, which has been disclosing new facts every day.