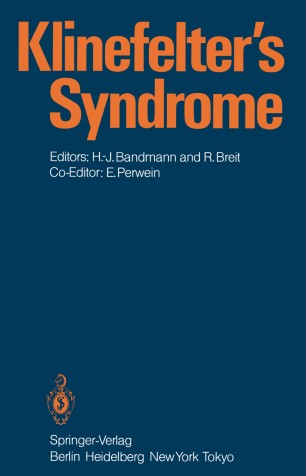 Klinefelter's syndrome occurs relatively frequently, being diagnosed for one in 600 male infants, yet it is probably very rare that it is recognized early enough to make effective treatment possible. Often the person afflicted does not go to a doctor until physical and emotional disturbances have developed on the ba­ sis of the syndrome. The appropriate therapy at the correct time can prevent many of these disturbances. In our andrology outpatient clinic we encountered Klinefelter's syndrome almost three decades ago in patients suffering from impotentia generandi. It was not until later that we dealt with it in our capacities as dematologists. It was observed at a rate too high to be coincidental among younger men suffer­ ing from ulcera crurum. On the other hand, we failed to see the condition during our work as con­ sultants in other specialities, especially internal medicine, although we re­ peatedly attempted to identify it. We should have encountered it at least occa­ sionally in our 10 years working in the Munich hospitals with their more than 4000 beds. It was this imbalance between the allegedly relative frequency of this condition and its rare detection which led us to plan a Klinefelter sympo­ sium. We soon determined, during a first search of the literature, that there was information in many more subject areas that we had expected or even guessed.