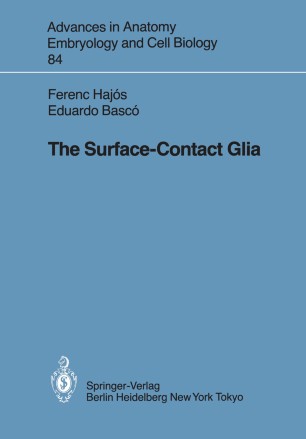 1. 1 Brief History The diversity of cells constituting the central nervous system did not deceive last century neurohistologists in recognizing that this organ contained essentially two cell types: the nerve cells, or as termed according to the emerging concept of neural contiguity, the neurons, and the neuroglial cells. Neurons were clearly shown to be the means of excitability, impulse generation, impulse transmission, and connectivity in the neural tissue. The neuroglia, as indicated by its name (YAloc=cement or glue) given by Virchow (1860), was thought to be the cement­ ing material ensuring the coherence of the nervous tissue, filling in the spaces of the neuropil, and isolating neuronal cell bodies. While this supposedly passive role did not attract multidisciplinary research on the neuroglia, successful efforts were made to extend our knowledge of the physiology, morphology, and bio­ chemistry of neurons. As a result of this, the investigation of the neuroglia carried out in the first half of this century was mainly confined to morphology, often as a by-product of comprehensive analyses of neuronal systems. At any rate, the histological classification of the neuroglia was accomplished, laying a framework which has been used to the present day. Accordingly, the glia was divided into two major groups: the macro- and microglia. The former comprises two further subclasses, the astroglia and oligodendroglia.