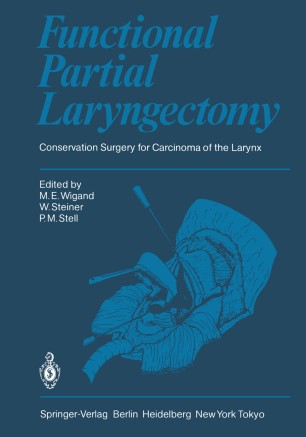 Conservation Surgery for Carcinoma of the Larynx

Cancer of the head and neck continues to be a challenge. Increasing incidence has pushed malignancy of the upper aerodigestive tract into the first rank of cancer. In some countries it follows bronchial carcinoma in frequency and is more common than gastro-intestinal and gynaecological cancer. This increasing incidence makes it difficult to train enough highly specialised staffwho are also responsible for the care of many other patients, requiring sophisticated microsurgery of the ear and nose. The question of quality is even more difficult. Oncological success in the treat­ ment of head and neck cancer is bought at the price of crippling of vital functions such as eating, breathing, voice and sight and furthermore of striking aesthetic de­ formity. Mutilation of this highly functional collection of organs is more keenly felt than that of any other region of the body. It is vital, therefore, that the surgeon keeps up with the recent achievements of functional surgery in order to offer the best ser­ vice to his patients. Cancer of the larynx is no exception. Despite newer techniques of radiotherapy and chemotherapy, surgery still gives the best oncological results. This requires a wide spectrum of operations varying from minimal ablation to total laryngectomy.