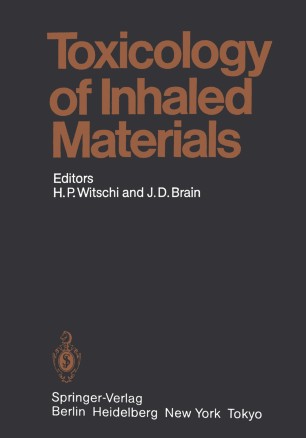 This book deals with the methods and scientific basis of inhalation toxicology. It describes devices and facilities needed to expose animals to inhaled particles and gases as well as approaches to estimating or measuring the fraction of the inhaled material that is retained in the respiratory tract. The book then reviews the evergrowing repertoire of techniques that can be used to measure the responses elicited by the exposure. Quantitative and qualitative anatomical, physiological, and biochemical strategies are discussed in detail. We believe that the toxicology of inhaled materials is an important and timely topic for several'reasons. During the past decade, morbidity and mortality attributable to cardiovascular disease have significantly decreased. Progress in combatting cancer, the second most important cause of death, has been slower, and lung cancer actually became the leading cause of death in men and the second leading cause of cancer death in women. In addition, the incidence of non-neo­ plastic respiratory diseases such as emphysema, fibrosis, and chronic bronchitis has increased the past decade. In the United States, the National Institutes of Health (NIH) has recently reported that chronic obstructive pulmonary disease affects nearly 10 miliion persons and accounts for 59,000 deaths yearly; indeed, it ranks as the fifth leading cause of death. Because the incidence is increasing, the NIH estimates that it may become the nation's fourth or even third leading cause of death by the year 2000.