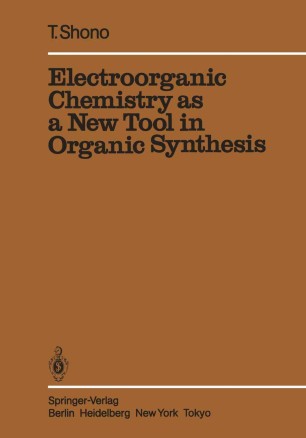 Electroorganic Chemistry as a New Tool in Organic Synthesis

Although the first electroorganic reaction used in organic synthesis is probably the famous Kolbe electrolysis published in 1849, no other remarkable reactions have been found until the reductive dimerization of acrylonitrile to adipo­ nitrile was developed by Dr. M. M. Baizer of Monsanto Co. in 1964. Since then, the electro organic chemistry has been studied extensively with the expectation that it is a new useful tool for finding novel reactions in organic synthesis. The purpose of this book is not to give a comprehensive survey of studies on electrochemical reactions of organic compounds but to show that the electro organic chemistry is indeed useful in organic synthesis. Thus, this book has been written under the following policies. (1) Since this monograph is mainly concerned with organic synthesis, only few studies carried out from the view­ point of electrochemical, theoretical, or analytical chemistry are mentioned. (2) Since electroorganic chemistry covers a great variety of reactions, the types of reactions described in this book are selected mainly with regard to their application in organic synthesis. Simple transformations of functional groups are only described in particular cases, and also some well established processes such as the Kolbe electrolysis, pinacolic coupling, and hydrodimerization are only briefly mentioned. (3) Since many reports have already been published for each type of these reactions, only a limited number of the relevant papers are cited in this book.