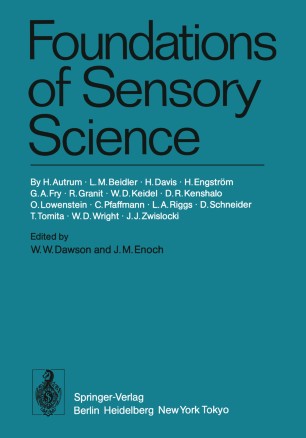 When seen from an outsider's vantage point, the development of knowledge in the sensory sciences must appear massive and the result of some carefully followed master plan. In reality, it is the result of numerous relatively independent human endeavors shaped by application of the scientific method. The comprehensive construction of quantitative theories of sense organ function has occurred only recently -but at an explosive rate prefaced by centuries of expansion in the physical sciences. Predicated on this growth, the twentieth century may become known as the age of the biological sciences. With the exception of a modest number of intellectual giants, there were few contributors to the foundations of the sensory sciences before the dawn of this century. At least 90% of existing knowledge has been produced by scientists working in laboratories founded since 1920. If any single scientist and his laboratory may be identified with the growth in the sensory sciences, it is EDGAR DOUGLAS ADRIAN, First Baron of Cambridge and leader of the Physiological Laboratory at Cambridge University, England. Lord ADRIAN'S influence upon the sensory sciences was great, not only in terms of his contribution to knowledge itself but also through the influence which he exerted upon numerous young scientists who spent weeks or years at the Cambridge laboratory and who later returned to their homelands and colleagues with the seeds of vigorous research and quantitative inquiry firmly implanted.