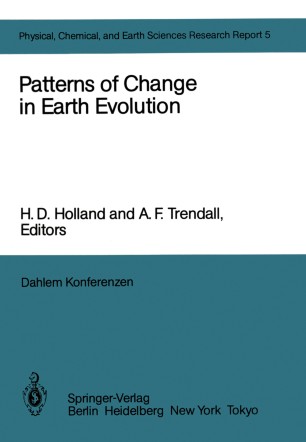 Patterns of Change in Earth Evolution

Report of the Dahlem Workshop Patterns of Change in Earth Evolution Berlin 1983, May 1–6

3 of the experience of the last few generations. The group of happily unexperienced events includes large bolide impacts with the Earth. The evidence for the occurrence of such impacts at intervals of some tens of millions of years is quite convincing, and Lyell stands admonished by Hamlet: "There are more things in heaven and earth, Horatio, than are dreamt of in your philosophy. " The role of bolide impacts on the history of life during other portions of the Phanerozoic Eon is less clear (see Raup and Fischer, both this volume), and catastrophic changes unrelated to extraterrestrial processes may have been important (see Holser, this volume). Changes in the later Precambrian biota are still difficult to interpret, in part because the preservation of soft-bodied animals from this period of Earth history is so unusual (see Seilacher, this volume). During the past billion years or so, bolide impacts have exerted a significant effect on the Earth's surface and its inhabitants, but not on its interior. The 3800 Ma rocks at Isua in West Greenland are the oldest terrestrial rocks that are currently available for inspection (see Dymek, this volume). They contain abundant evidence for the operation of chemical and physical processes that are similar to those of the present day. This situation could not have prevailed during the entire 700 Ma preceding the formation of the Isua rocks.