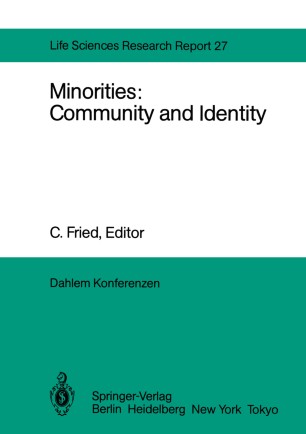 Report of the Dahlem Workshop on Minorities: Community and Identity Berlin 1982, Nov. 28 – Dec. 3

they belong. Do communities have rights, indeed even an existence, which are not merely the hypostasis of the individual rights and existences collected in them? This conflict is then more striking as it was a conscious decision of the or­ ganizers of the workshop to focus attention on what might broadly be called liberal democracies: those societies which share a commitment to the princi­ ples of democratic participation, to the right of equal concern and respect of all members of the community, and to the basic liberties of association, ex­ pression, and thought. Ours was not the smug premise, however, that every so­ ciety which proclaims these principles is sufficiently or even truly devoted to them. But we did assume that we would have enough to do if we explored the implications of these widely shared ideals for the topic of linguistic, ethnic, and national minorities as these problems arise in societies where an appeal to them is not an empty gesture. The nations from which our participants were drawn are societies in which appeal to these principles has some point. They are all societies in which the efforts of politicians and the intelligence of schol­ ars need not be devoted exclusively to the tactical issues of winning some mod­ icum of respect for basic human rights from unwilling regimes. And yet all these societies have experienced significant difficulty in determining what the concrete meaning in actual situations of these general principles might be.