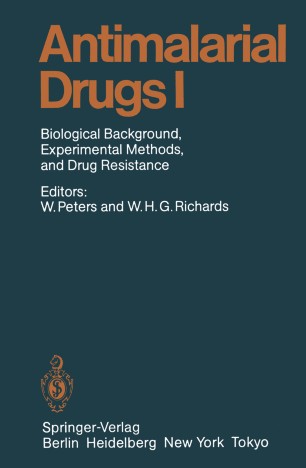 Of all the parasitic diseases that beset man in the warmer parts of the world, malaria is still the major cause of morbidity and mortality. In spite of intensive efforts to interrrupt its transmission malaria still threatens over 800 million people, more than one-fifth of the world's population. Malignant tertian malaria caused by Plasmodium Jalciparum probably kills a million every year. Vivax malaria temporarily incapacitates millions more. The search for antimalarial drugs, both natural and syn. thetic, has been and continues to be one of the most challenging and, at times, rewarding exercises ever undertaken by ;:;hemists and biologists. The magnitude of the effort is reflected by the fact that, in the last 15 years, well over 250000 compounds have been screened for antimalarial activity in just one programme, that carried out under the auspices of the Walter Reed Army Institute of Research, not to mention sporadic studies undertaken by other research workers and organisations. While most people engaged in the search for new drugs agree that a rational approach based on knowledge of the intimate biochemical pathways of the target cells would be ideal as well as intellectually satisfying, most are reluctantly obliged to concede that, up to the present time, the chances of success following a more or less empirical search have been far greater. Spectacular advances in molecular biology and biochemistry in recent years, however, are rapidly changing this situation.