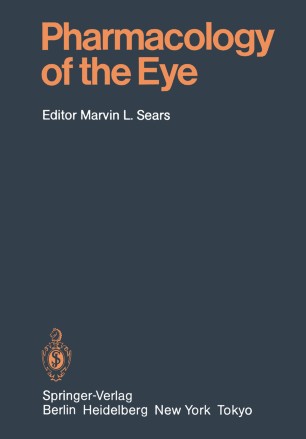 Pharmacology of the Eye

Roots of the theory and practice of ocular pharmacology may be traced to the ancient Mesopotamian code of Hammurabi and then to several papyri reflecting the clinical interests of the Egyptians. The evolution of its art and science was irregularly paced until the nineteenth century when Kohler, in 1884, proved the anesthetic effect of cocaine on the cornea, and when Fraser, Laquer, Schmiedeberg, Meyer, and others studied the pharmacology of the autonomic nervous system by way of observations of the pupil. Advances in the past few decades have been nothing short of explosive. How can the student, physician, or basic research scientist stay in touch with these electrifying studies? To help with the answer to this question, the authors set as their goal the development of increased understanding so that the student, research scientist, and ophthalmologist can cope with the latest discoveries. The authors want to narrow what appears to be an ever-increasing gap between basic science and ophthalmology. The basic aspects of pharmacology have been presented in light of the natural physiology. In this regard, while distinctions among endogenous mechanisms, drug effects, and the pathogenesis of disease are to be separately recognized, appreciation must be given to the concept that both the desirable and unwanted manifestations or functions caused by either disease or drugs must very often represent a quantitative change in normal metabolic pathways.