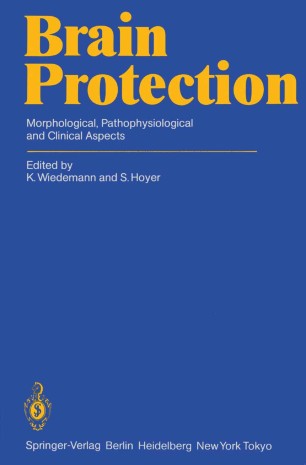 Significant progress has doubtlessly been made in the field of cere­ bral protection compared to earlier centuries, as recently reviewed by Elisabeth Frost (6). She cites the recommendations for treat­ ment of brain trauma by Areteus, a Greek physician of the second century A. D. He expressed quite modem views with regard to the need for prompt action considering complications that follow even minor symptoms. He advised burr holes for evacuation of hema­ toma in seizures, the use of diuretics and, most interestingly, also hypothermia. German surgeons of the 17th century had little more to offer than prescriptions of which the most effective constituent was alcohol (10). Thus, Sir Astley Cooper was probably the next surgeon to make noteworthy contributions when advising the use of leeches to the temporal artery and other means of bleeding in­ stead of surgical intervention in cases of raised intracranial pressure (loc. cit. 6). Although our knowledge has greatly expanded during the last two decades, extensive discussions have led to only few conclusions. Promising results from animal studies were translated to clinical sit­ uations only to yield controversial and sometimes confusing results. Since the observations of Brierly (5) on ischemic cell damage, im­ proved information on structural aspects, probably even related to concomitant biochemical studies, should allow the validity of thera­ peutic concepts to be verified. Investigations on cerebral ischemia have led to the differentiation of synaptic transmission failure and membrane failure.