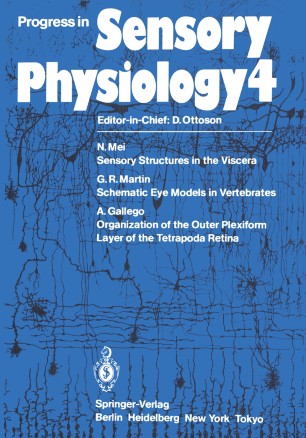 The study of the functional organization of the first synapse of the centripetal visual pathway at the outer plexiform layer level (OPL) ought to be made through the application of combined histological, electrophysiological, and neurochemical techniques. A large amount of new evidence has been accumu­ lated in the past 20 years on the structure of the retina and on the electrical responses of retinal cells to light stimulus. Also, recently, many substances considered as neurotransmitters in the brain have been found in the retina. The goal of the study of retinal function is to integrate the data obtained by structural and electrophysiological techniques and to identify and determine the role played by neurotransmitters or neuromodulators in the function of the retina. In this study it is important to realize the morphological and biochemical diversi­ ty displayed by the visual cells in the vertebrate retina which, according to Cresci­ telli (1972), has been produced "through the interaction of natural selection with diversity in the photic environment." The evidence obtained shows that bipolar and especially horizontal cells, closely related to visual cells, display morphologi­ cal and probably biochemical differences among classes, genus, and even species according to the photic environment. These differences give peculiarities to the organization of the OPL, which must be taken into account when studying a par­ ticular retina with electrophysiological or neurochemical techniques.