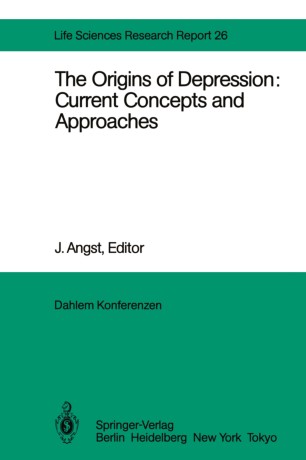 The Origins of Depression: Current Concepts and Approaches

Report of the Dahlem Workshop on The Origins of Depression: Current Concepts and Approaches Berlin 1982, Oct.31 – Nov. 5

3 and a fraction mayor may not respond to treatment. On the behavioral level, animal research shows that a variety of experimental conditions can induce de­ pression. The same is true in the field of treatment, where pharmacologically highly different drugs can equally alleviate depression in animals and hu­ mans. The question as to whether this is due to a heterogeneity of depressive subjects based on different pathogenetic mechanisms is open to discussion. We can look for common features of all possible causal factors in the hope of finding a single basic mechanism. Many divergent findings may also be ex­ plained as peripheral changes of a highly complicated dynamic system. In the field of psychopharmacology, a circular reasoning has become evident in the sense that originally the clinical antidepressive response was founded on empirical grounds only. In a second step, an attempt was made to characterize some clinically active compounds pharmacologically, and in a third, further compounds were developed based on aspects of the pharmaco­ logical profiles. Moreover, the post hoc development of a pharmacological screening method has the serious disadvantage of delaying breakthroughs into new fields.