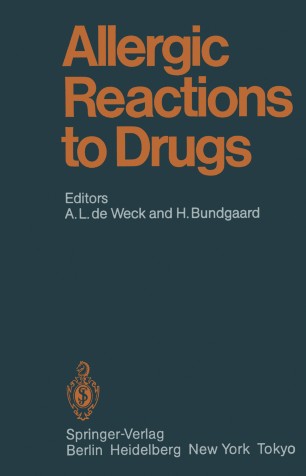 According to most studies, allergic reactions represent 35%-50% of all untoward reactions to drugs, yet the pharmacological literature concerning the clinical aspects, diagnosis, and pathophysiological mechanisms of drug allergy is markedly less extensive than reports dealing with the toxicological or pharmacological effects of drugs. The main reasons for this state of affairs may be on the one hand that until a few years ago the pathophysiological mechanisms of the various types of allergic reactions were not well understood, and on the other hand that objective diagnosis of a drug allergy is still fraught with serious difficulties. Drug allergy is still an unpopular topic for most allergologists and pharmacologists; this is reflected by the fact that despite their frequency, allergic reactions to drugs still occupy a relatively small proportion of space in most pharmacology handbooks and in classical books devoted to the side effects of drugs. There has recently been considerable progress in research into the immunologi­ cal and pathophysiological events occurring in allergic reactions, and on that basis investigations of various drug allergies have also yield~d new objective findings. Consequently, it was natural to attempt a review of the most frequent and important drug allergies in the form of a handbook. We originally intended to present a comprehensive review of all drug allergies, but the realization of this goal soon became more difficult than we had at first imagined.