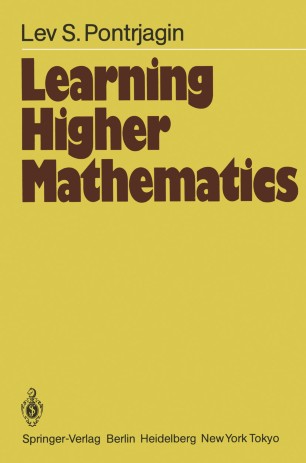 Part I: The Method of Coordinates Part II: Analysis of the Infinitely Small

Lev Semenovic Pontrjagin (1908) is one of the outstanding figures in 20th century mathematics. In a long career he has made fundamental con­ tributions to many branches of mathematics, both pure and applied. He has received every honor that a grateful government can bestow. Though in no way constrained to do so, he has through the years taught mathematics courses at Moscow State University. In the year 1975 he set himself the task of writing a series of books on secondary school and beginning university mathematics. In his own words, "I wished to set forth the foundations of higher mathematics in a form that would have been accessible to myself as a lad, but making use of all my experience as a scientist and a teacher, ac­ cumulated over many years. " The present volume is a translation of the first two out of four moderately sized volumes on this theme planned by Pro­ fessor Pontrjagin. The book begins at the beginning of modern mathematics, analytic ge­ ometry in the plane and 3-dimensional space. Refinements about limits and the nature of real numbers come only later. Many concrete examples are given; these may take the place of formal exercises, which the book does not provide. The book continues with careful treatment of differentiation and integration, of limits, of expansions of elementary functions in power se­ ries.