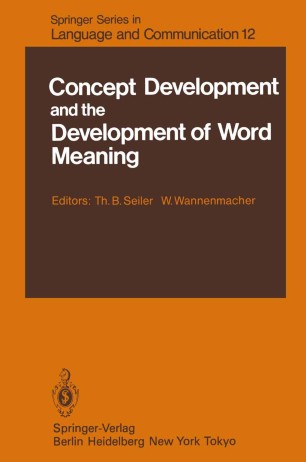 Part of the Springer Series in Language and Communication book series (SSLAN, volume 12)

This volume owes its existance to many different sources and influ­ ences. It is based on a meeting that took place from April 30 to May 2, 1982 at the University of Technology in Darmstadt. The idea for that meeting came while we were elaborating a research program on concept development and the development of word meaning; we were inspired by Werner Deutsch of the Max Planck Institute for Psycholinguistics in Nijmegen (The Netherlands) and by the Volkswagen Foundation in Hannover (Federal Republic of Germany) to organize an international conference on the same topic. We set out to invite a long list of colleagues, and we only regret that not all of them were able to attend. This volume should not be viewed as the proceedings of that conference. On the one hand, it does not include all of the papers presented there, and on the other hand, some of our colleagues who were unable to attend were nevertheless willing to write contributions. Furthermore, some who did pre­ sent papers at the conference revised and reformulated them or even submitted completely new ones for this book. We feel, however, that in the end we have arranged a valuable collection of work in the theory and research of a field that has occupied not only psychologists and linguists, but also philosophers, anthropologists, and many others for a long time.