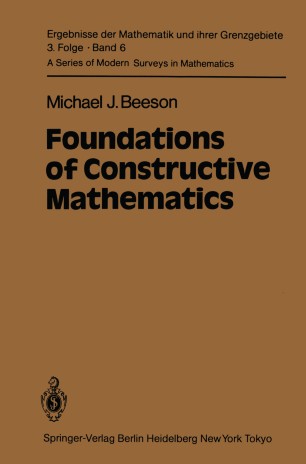 This book is about some recent work in a subject usually considered part of "logic" and the" foundations of mathematics", but also having close connec­ tions with philosophy and computer science. Namely, the creation and study of "formal systems for constructive mathematics". The general organization of the book is described in the" User's Manual" which follows this introduction, and the contents of the book are described in more detail in the introductions to Part One, Part Two, Part Three, and Part Four. This introduction has a different purpose; it is intended to provide the reader with a general view of the subject. This requires, to begin with, an elucidation of both the concepts mentioned in the phrase, "formal systems for constructive mathematics". "Con­ structive mathematics" refers to mathematics in which, when you prove that l a thing exists (having certain desired properties) you show how to find it. Proof by contradiction is the most common way of proving something exists without showing how to find it - one assumes that nothing exists with the desired properties, and derives a contradiction. It was only in the last two decades of the nineteenth century that mathematicians began to exploit this method of proof in ways that nobody had previously done; that was partly made possible by the creation and development of set theory by Georg Cantor and Richard Dedekind.