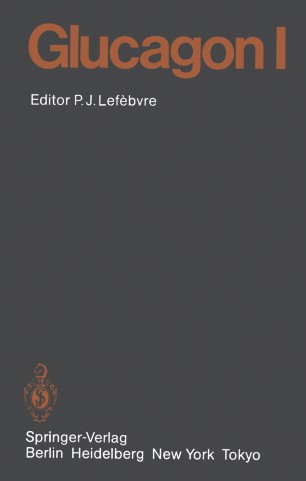 The Editorial Board of the Handbook of Experimental Pharmacology apparently did not hurry in suggesting production of a volume on glucagon since the present opus is number sixty-six in the series. This fact is even more striking if we consider that 34 volumes published over about eight years will separate the books on glucagon from those on insulin on library shelves, whereas only a few microns separate the cells manufacturing these two polypeptides within the islets of Langerhans in the pancreas! Numerous factors have probably caused this dicrimination; four of them are: First, insulin deficiency or resistance is the cause of one of the most serious and distressing diseases, diabetes mellitus, which affects millions of people, whereas glucagon deficiency is apparently an extremely rare disorder, for which detailed reports are published of individual cases whenever they occur. Second, since its discovery in 1921 by BANTING and BEST, insulin has been irreplaceable for the treatment of the most severe forms of diabetes, whereas, in contrast, glucagon was until recently considered a relatively minor therapeutic agent. Third, whereas insulin is a compound which has been well characterized since the pioneering work of SANGER and its biosynthesis clearly identified by STEINER and his co-workers, glucagon, also well characterized chemically, has suffered from its parenthood with the so-called "glucagon-like immunoreactive substances", an incompletely defined series of immunologically related polypeptides present in the gut, the pancreas and some other parts of the body.