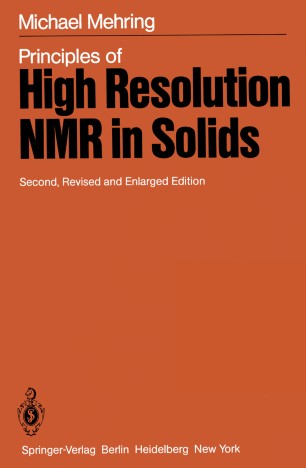 The field of Nuclear Magnetic Resonance (NMR) has developed at a fascinating pace during the last decade. It always has been an extremely valuable tool to the organic chemist by supplying molecular "finger print" spectra at the atomic level. Unfortunately the high resolution achievable in liquid solutions could not be obtained in solids and physicists and physical chemists had to live with unresolved lines open to a wealth of curve fitting procedures and a vast amount of speculations. High resolution NMR in solids seemed to be a paradoxon. Broad structure­ less lines are usually encountered when dealing with NMR in solids. Only with the recent advent of mUltiple pulse, magic angle, cross-polarization, two-dimen­ sional and multiple-quantum spectroscopy and other techniques during the last decade it became possible to resolve finer details of nuclear spin interactions in solids. I have felt that graduate students, researchers and others beginning to get involved with these techniques needed a book which treats the principles, theo­ retical foundations and applications of these rather sophisticated experimental techniques. Therefore I wrote a monograph on the subject in 1976. Very soon new ideas led to the developement of "two-dimensional spectroscopy" and "multiple-quantum spectroscopy", topics which were not covered in the first edition of my book. Moreover an exponential growth of literature appeared in this area of research leaving the beginner in an awkward situation of tracing back from a current article to the roots of the experiment.