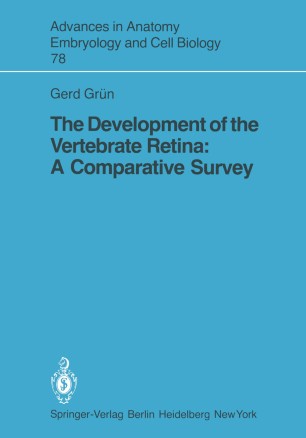 The Development of the Vertebrate Retina

The mature vertebrate retina is a highly complicated array of several kinds of cells, capable of receiving light impulses, transforming them into neuronal membrane currents, and transmitting these in a meaningful way to central processing. Before it starts to develop, it is a small sheet of unconspicuous cells, which do not differ from other cells of the central nervous system. The chain of events which lead to the trans­ formation from this stage into that of highly specialized cells ready to fulfll a specific task, is usually called "differentiation. " Originally, this word indicated firstly the proc­ ess of divergence from other cells which were previously alike, and secondly, the change from an earlier stage of the same cello lt has become widespread practice to imply by the word "differentiation" also the acquisition of specific properties and capacities which are characteristic of a mature, Le. , specifically active, cello Every cell is active at any stage of development, but certain activities are shared by most cells (e. g. , the activities of preparing and accomplishing proliferation, that of initiating development, that of maintaining a certain level of metabolism), while there are others which are shared by only a small number of - originally relate- cells. In most cases these latter activities are acquired by the fmal steps of cellular development, the terminal "differentiation. " In the context of the present paper, the word "function" will refer to this latter type of specific activity.