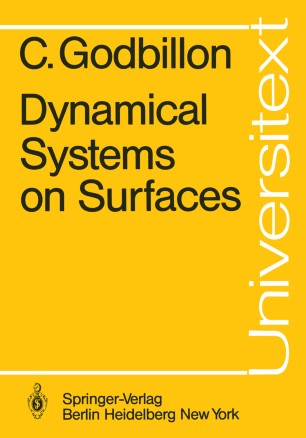 These notes are an elaboration of the first part of a course on foliations which I have given at Strasbourg in 1976 and at Tunis in 1977. They are concerned mostly with dynamical sys­ tems in dimensions one and two, in particular with a view to their applications to foliated manifolds. An important chapter, however, is missing, which would have been dealing with structural stability. The publication of the French edition was re­ alized by-the efforts of the secretariat and the printing office of the Department of Mathematics of Strasbourg. I am deeply grateful to all those who contributed, in particular to Mme. Lambert for typing the manuscript, and to Messrs. Bodo and Christ for its reproduction. Strasbourg, January 1979. Table of Contents I. VECTOR FIELDS ON MANIFOLDS 1. Integration of vector fields. 1 2. General theory of orbits. 13 3. Irlvariant and minimaI sets. 18 4. Limit sets. 21 5. Direction fields. 27 A. Vector fields and isotopies. 34 II. THE LOCAL BEHAVIOUR OF VECTOR FIELDS 39 1. Stability and conjugation. 39 2. Linear differential equations. 44 3. Linear differential equations with constant coefficients. 47 4. Linear differential equations with periodic coefficients. 50 5. Variation field of a vector field. 52 6. Behaviour near a singular point. 57 7. Behaviour near a periodic orbit. 59 A. Conjugation of contractions in R. 67 III. PLANAR VECTOR FIELDS 75 1. Limit sets in the plane. 75 2. Periodic orbits. 82 3. Singular points. 90 4. The Poincare index.