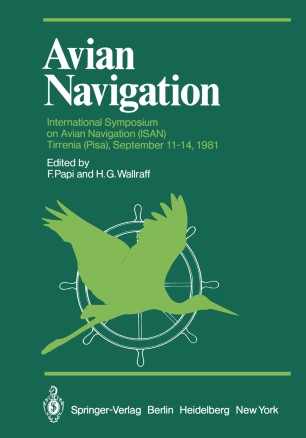 Right from the start of this century, field observations and the patient ringing of birds have made available a growing mass of data on the breeding and resting areas of migratory species and on the course, period and duration of their seasonal flights. Considered as a whole, this work on migration morphology commands admiration, and when view­ ed in detail it reveals fascinating insights into the extraordinary naviga­ tional performances of many bird species, which find their way over enormous distances. Yet only a few dozen physiologists are actively trying to answer the question of how these performances are achieved. Experimental work on migratory birds raises many difficulties, some of them insuperable, so that many researchers carry out their experiments on the homing pigeon, which is constantly motivated by homesickness and ready to display its ability to flyaway home. Many of the problems connected with bird navigation are still un­ solved, but a rapidly growing body of results is being produced along with a variety of new ideas and approaches. A clear majority of the stu­ dents of bird navigation met in September 1981 in Tirrenia, a seaside resort on the Tyrrhenian coast, where each of them offered new in­ sights into his or her recent investigations. Their contributions have been connected in this volume, which provides an up-to-date conspec­ tus of the stage reached by research in this field.