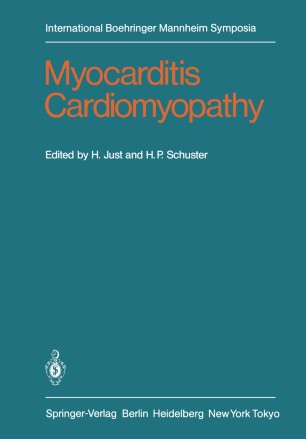 Selected Problems of Pathogenesis and Clinic

Primary myocardial disease, nowadays referred to as congestive or, more re­ cently, dilating cardiomyopathy, comprises disorders of varied etiology. Most oftenly the pathogenetic mechanism or causative agent remains unknown. The significance of inflammatory processes, i.e. myocarditis in a wider sense as the etiologic factor has been debated for many years. In a few instances, especially in children and newborns viral infections can be incriminated. In adults this etiology can be ascertained only in rare instances. And it has remained entirely uncertain if, or under which circumstances, and how often virus myocarditis can lead to a chronic disorder of the heart, namely dilated cardiomyopathy. Although it would seem conceivable that an immunological response to an infectious agent might induce parenchymal damage with subsequent loss of cellular function and structural integrity of permanent nature, i.e. dilatation, functional deterioration and dysrhythmias, numerous attempts to establish such a pathogenetic mechanism have not yet furnished convinicing results. Therefore the reader will direct his attention specifically to the respective contribution in this volume. Morphologic studies have yielded a host of new and intriguing findings in cardiomyopathy, but have likewise failed to settle the basic question as to which etiology can be held responsible in a given case, especially if an inflam­ matory process can be incriminated. Specific processes such as sarcoidosis of the heart undoubtedly furnish examples of chronic inflammation as a cause of dilating cardiomyopathy. This disorder, however, as a specific inflammato­ ry myocardial affection, i.e. myocarditis, is encountered only infrequently.