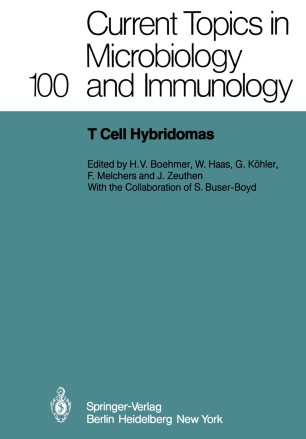 A Workshop at the Basel Institute for Immunology

For more than ten years cell fusion techniques have been applied in studies on various lymphocyte functions. Ig expression was first studied in hybrids obtained by fusing myeloma cells with fibroblasts (1) or lymphomas (2), both of which do not produce Ig, and with Ig­ producing myelomas (3) or human blood lymphocytes (4). Kohler and Milstein (5) fused a myeloma with spleen cells from immunized mice. Up to 10% of the hybrids obtained secreted antibodies specific for the immunizing antigen. This suggested that plasma cells preferenti­ ally fused with the myeloma cells, a finding which was of enormous practical value. It was found that both Band T lymphocytes could be fused with the T cell tumor BW5147, which is however not permissive for Ig synthesis (6). A very large number of T cell hybridomas were generated by fusing BW5147 with cell populations containing in vivo or in vitro activated cells (7). The hybrids showed no specific T cell functions and binding assays for T cell receptors were not available. In particular, no hybrids were obtained which expreS1ed specific cytolytic activity that could be tested in short-term Cr­ release assays (8). However, the frustrations expressed about these failures, published in January, 1978 (9), were relieved by Taniguchi and Miller's publication a few months later of T cell hybridomas producing antigen-specific suppressor factors (10). Unfortunately, their hybrids rapidly lost factor production.