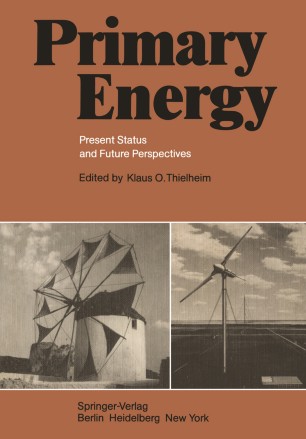 The enormous public interest of specialists as well as of engaged and concerned citizens in the energy problem can be understood in view of the fact that the future of national and world-wide economy depends on the availability of sufficient primary energy. The questions arising are: which forms of primary energy exist principally? by what means and at what cost can they be brought to useful application? and what is their possible role in the present and future energy scenario? Another reason which may not be so obvious, but which eventually may prove to be of great importance as far as public acceptance of energy technologies is con­ cerned, lies in the fact that the existing conscious or subconscious fears arising from confrontation with scientific and technological progress - to which even for the educated layman intellectual access is diffi­ cult - have been sublimated onto the energy problem and especially onto the problem of nuclear energy. Un­ like other developments, the emergence of nuclear ener­ gy has brought to our notice the ambivalence of ad­ vancing science and technology, which may either be used peacefully or misused militarily. Nuclear energy can help to overcome the increasing hunger for energy in the world, but it can also lead to the extinction of human life from the surface of this plant. More and more, mankind is confronted with chances and risks of new discoveries.