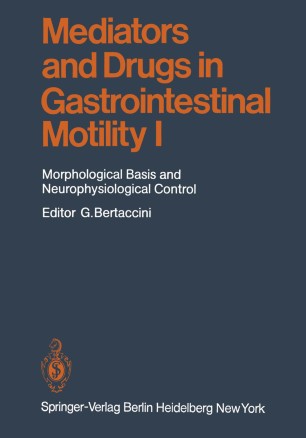 Mediators and Drugs in Gastrointestinal Motility I

Since the exhaustive Handbook of Physiology (Alimentary Canal, Section 6, Motility) edited by CHARLES F. CODE in 1968, no complete survey of the morphological basis and the physiological control of intestinal motility has been published, in spite of the enormous amount of new data in the literature on this topic. The new techniques and methodologies, the use of electron microscopy, radioimmunoassay and binding techniques, as weIl as ever more sophisticated electrophysiological procedures have made possible areal flood of discoveries in this field. Moreover, the possibility ofnew studies ofthe endocrine cells in biopsies of human intestinal mucosa even during routine endoscopies, has opened new horizons for gastroenterologists and generated a number of important contribu­ tions to our knowledge of the morphology and physiopathology of the gut. As usual, new discoveries have also revealed both ignorance and many new problems. For tbis reason, although many of the data reported in this volume can be considered as firmly established, others still require confirmation, and the results of new research in this field are awaited with extreme interest. Since advances are occurring so rapidly, even experts in the specific topics need frequent comprehensive reviews. To avoid an excessively large volume, considera­ tions ofthe pancreas, liver, and biliary system were not included in this Handbook, which, nevertheless, has attempted to off er the reader the essence of more than 1,500 papers.