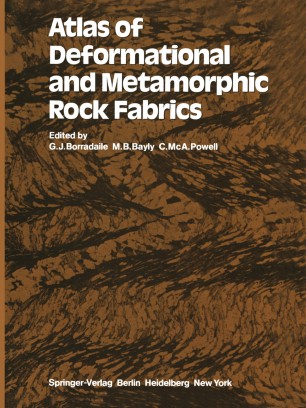 In May 1976 Lucian B. Platt organized a highly successful Penrose Confer­ ence on The Formation of Rock Cleavage at Bryn Mawr College in Penn­ sylvania, U. S. A. The meeting drew together about 70 specialists from both sides of the Atlantic and from Australasia, who contributed discussions on various aspects of rock cleavage and its formation. Even early in the meet­ ing it became clear to the participants that they lacked a common terminol­ ogy, that often the same technical word implied different things to different people and that observables and descriptors were loosely defined. In an at­ tempt to improve communication the present editors contacted about 190 workers after the conference with a view to compiling a set of photographs with captions to illustrate exactly what workers were talking about. As a re­ sult the compilation was published as a limited edition by an inexpensive offset process at the University of Tasmania. The success of that provisional edition of the Atlas of Rock Cleavage and the responses of the readers prompted us to make a more extensive collection of material, contact a wider range of workers and, with the support of Dr. Konrad Springer, to publish the present higher-quality reproduction of the contributors' plates.