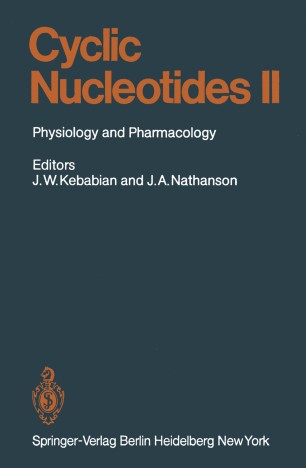 Cyclic nucleotides are intimately involved in the consequences of either stimulation or blockade of receptors; therefore, an understanding of the biochemistry of cyclic nucleotides ought to be important for pharmacologists. Pharmacology is a science that among other things investigates chemical compounds that affect the physiology of cells, tissues and organs. Frequently pharmacologists account for the effect of low concentrations of a drug upon a tissue by invoking the presence of a receptor upon the surface of the cell. Traditional pharmacologists excelled at identifying and classifying the properties of receptors. A. J. CLARK'S monograph in the earlier series of the Handbook of Experimental Pharmacology (CLARK 1937) summarized the mathematics underlying the traditional pharmacological approach towards receptors. By its nature, however, classic pharmacology provided little useful information about the intracellular events occurring as a consequence of occupying a receptor; for example, ALQUIST (1948) identified the beta-adrenocep­ tor, but he did not provide any insight into how stimulation of the receptor produces tissue-specific physiological responses. The discovery of cyclic AMP by RALL and SUTHERLAND (see RALL, Vol. I) led to biochemical investigations of many different receptors (including ALQUIST'S beta-adrenoceptor) that share a cyclic nucleotide as a common factor in the biochemical mechanisms that translate the occupancy of receptors into physiological effects. Ten years ago, in the introduction to their monograph on cyclic nucleotides, ROBISON et al. (1971) commented on the rapid growth of interest in cyclic nucleotides over the preceding years.