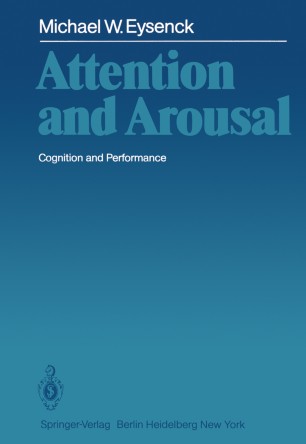 The thinker who has a mortal fear of being wrong will give all that is valuable in himself to that little ambition. Walter Lippmann (1914) Psychology has always been plagued by passing fads and fan­ cies to a greater extent than is seemly in a scientific discipline. Over the past few years the Zeitgeist can be summed up by the two words 'cognitive psychology'. Indeed, a recent poll of academic psychologists in American indicated that over 80% of them regarded themselves as cognitive psychologists! Cognitive psychology is in the ascendant, but it has never been clear to me that it has addressed all of the appropriate is­ sues. In particular, information processing in the real world (and even in the laboratory) occurs within a motivational and emotional context, but cognitive psychologists usually main­ tain the convenient fiction that cognition can fruitfully be stud­ ied in isolation. The main reason for writing this book was to at­ tempt to demonstrate that there can be a useful cross-fertiliza­ tion between cognitive and motivational-emotional psycholo­ gy and that there are already tantalizing glimpses of the poten­ tial advantages of such inter-disciplinary research. The ideas of Donald Broadbent and his associates have exer­ cised a formative influence during the writing of this book. They discovered some years ago that there are intriguing simi­ larities (as well as differences) in the effects on performance of such apparently quite disparate factors as white noise, time of day, introversion-extraversion and incentive.