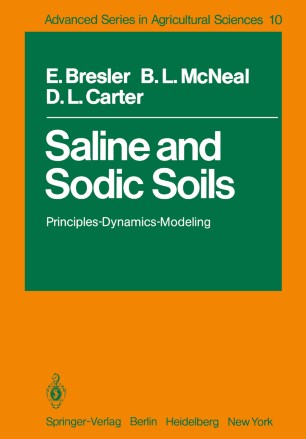 In keeping with the spirit of an Advanced Series in the Agricultural Sciences, we have attempted to address herein most of the current research areas being used to characterize, describe and manage salt-affected soils. Because of a certain amount of personal bias inherent in our individual viewpoints and backgrounds, some areas have been accorded more emphasis than others. It has been our goal, however, to provide either detail about, or at least a recent reference to, each major area of current soil salinity research. This information, coupled with what we hope to be a rather logical progression from descriptive material on equilibrium or near-equilibrium soil chemistry, through transport processes, to eventual management practices including some elementary economic decisions, should enable the reader to bridge the gap from introductory soil chemistry or soil physics texts to the basic literature of this area. The text will be perceived by the astute reader as somewhat uneven in its treatment of respective sections. We feel that this is to a certain extent appropriate, for it thus portrays the unevenness of progress to date in the corresponding areas of research. The management of saline and sodic soils remains largely an empirical semi-science or even art, whereas transport phenomena are normally dealt with in a much more theoretical (and also a much more highly mathematical) vein. Equilibrium soil chemistry has historically occupied an intermediate position with respect to its mix of empiricism and theoretical rigor.