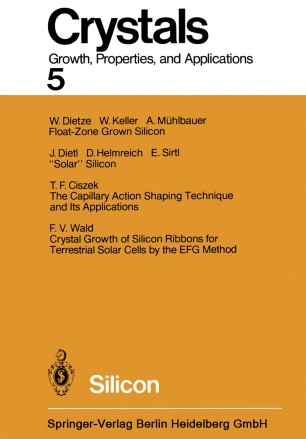 1.1 The Role of Silicon as a Semiconductor Silicon is unchallenged as a semiconductor base material in our present electronics indu­ stry. The reasons why it qualifies so strongly for this particular purpose are manyfold. The attractive combination of physical (electrical) properties of silicon and the unique properties of its native oxide layer have been the original factors for its breathtaking evolution in device technology. The majority of reasons, however, for its present status are correlated with industrial prosessing in terms of charge units ( economy), reliability (reproducibility), and flexibility, but also its availability. The latter point, in particular, plays an important role in the different long-term projects on the terrestrial application of solar cells. Practically inexhaustive resources of silicon dioxide form a sound basis even for the most pretentious programs on future alternatives to relieve the present situation in electrical power generation by photovol­ taics. Assuming a maximum percentage of 10% to be replaced by the year 2000 would roughly mean a cumulative annual production of 2 million metric tons of crude silicon (based on present solar cell standards)!). To illustrate the orders of magnitude that have to be discussed in pertinent programs: Today, the industrial silicon capacity of non-communistic countries (including ferrosili­ con and other alloys by their relative Si-content) amounts to some 2 million tons per year.