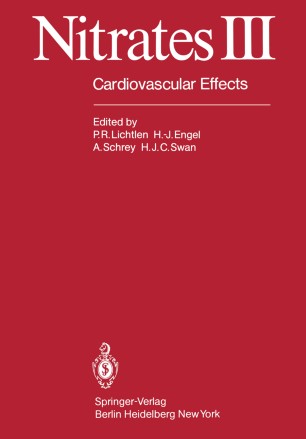 Pharmacological and clinical research on nitrates continues to be of growing interest in many centers. This is surprising in view of the fact that their favorable effects in angina pectoris were described by Brunton and by Murrell in the Lancet more than 100 years ago. As expected, a host of new information has been collected since the two previous symposia on nitrates held in Stockholm in 1975 and Berlin in 1978. New insights were gained into the pharmacology, pharmacokinetics and pharmacodynamics of nitrates, as well as into their clinical effects in acute and chronic ischemic heart diseases and in severe congestive heart failure. Relatively little progress, however, was observed in research into the basic action of nitrates. Although most investigators agree that intracellular sequestration of calcium is probably the main mechanism by which nitrates lead to the reduction of vascular smooth muscle tone, the exact site of their action still remains undefined. In contrast, dose-dependent differences in venous and arteriolar tone have long been clearly established. Treatment was again in the main stream of discussion. The question of tolerance following long-term administration was discussed in depth and the term "pseudotolerance" was introduced to describe the adaptation of the body's circulatory system to chronic vasodilation. This is especially important in long term prophylactic antiischemic treatment in stable, as well as in unstable angina pectoris (i.e. during increased vasomotor tone - spasm).