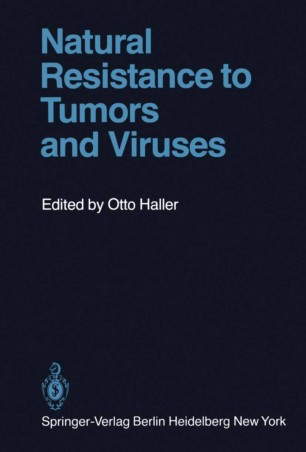 Natural Resistance to Tumors and Viruses

Natural resistance is now coming to be recognized as a potentially important phenomenon in host defense against infection and ma­ lignancy. Genetically controlled resistance mechanisms are usUally effective early in infection and before conventional immune responses are generated. Comparisons of experimental systems where natural resistance plays a prominent role demon­ strate the complexities of the host defense mechanisms involved, as evidenced in the present volume. Nevertheless, some com­ mon components of genetic resistance are discernible and largely comprise natural killer cells, macrophages, and interferon These and additional factors would seem to constitute a first line of de­ fense in host resistance against both viruses and tumors. It is evi­ dent that considerable variation in the relative importance of di­ stinct mechanisms may be found among various resistance sy­ stems and that, most likely, additional effector functions will be discovered. Resistance to tumors and most viruses is under polygenic control, has a complex mode of inheritance, and depends on appro­ priately complex effector mechanisms. Instances, however, whe­ re a single gene locus determines resistance or susceptibility to a virus, as in the case of resistance to flaviviruses or influenza viru­ ses, would seem to offer good prospects for elucidating the basic factors involved. Resistance to influenza virus would indeed seem to represent a comparatively simple situation: resistance is expressed at the host cell level, and interferon is its main media­ tor. The present volume provides insight into current concepts of such resistance mechanisms.