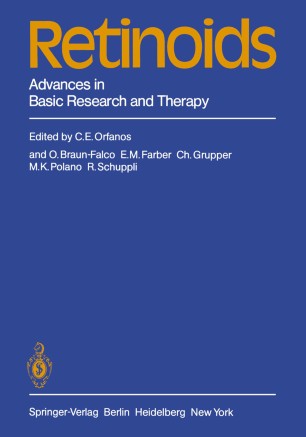 Advances in Basic Research and Therapy

With the aromatic retinoic acid analog Tigason oral and intravenous pharmacokinetic studies have been performed in 5 normal volunteers. Simultaneous fitting of single i. v. and oral data to a three-compartment model assuming first-order absorption was possible. Using Nonlin parameter estimates of the single-dose data, one is able to predict the decline in plasma levels of parent drug following cessation of a 10 days multiple dosing regimen up to 24 hours. The model is however unable to predict a phase of prolonged elimination observed beyond 24 hours. Moreover in 5 patients, who underwent chronic therapy (8-15 months), substantial plasma levels of both unchanged drug and main metabolite (corre­ sponding carboxylic acid) were observed up to 140 days after cessation of the therapy. An apparent half-life of elimination of 80-100 days can be calculated. The drug appears to be stored at some yet unknown storage site. Investigation of metabolism of Tigason in rats and humans revealed 19 different bio­ transformation products thus far, most of them appearing in the urine in low amounts (20010 of dose). A few of them (mainly the acid Ro 10-1670) after conjugation to glucuronic acid are excreted in the bile in high amounts (60-80% of dose). No drug appeared unchanged in the excreta after i. v. administration to rats. References 1. Bollag W (1971) Effects of vitamin A acid (NSC-122758) on transplantable and chemically-induced tumors. Cancer Chemother Rep 55:53-58 2.