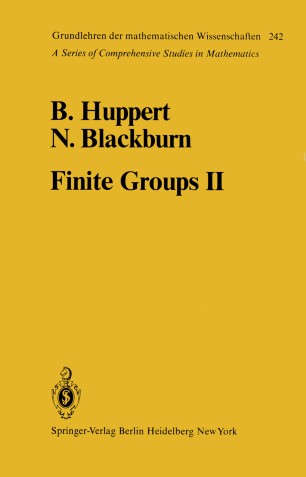 17):~t? L It CIFDr- ! wei! unsre Weisheit Einfalt ist, From "Lohengrin", Richard Wagner At the time of the appearance of the first volume of this work in 1967, the tempestuous development of finite group theory had already made it virtually impossible to give a complete presentation of the subject in one treatise. The present volume and its successor have therefore the more modest aim of giving descriptions of the recent development of certain important parts of the subject, and even in these parts no attempt at completeness has been made. Chapter VII deals with the representation theory of finite groups in arbitrary fields with particular attention to those of non-zero charac­ teristic. That part of modular representation theory which is essentially the block theory of complex characters has not been included, as there are already monographs on this subject and others will shortly appear. Instead, we have restricted ourselves to such results as can be obtained by purely module-theoretical means.