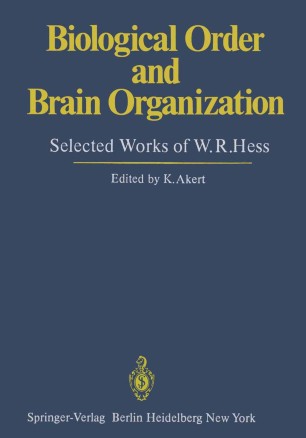 The centennial of his birthday (17 March 1881) prompted the publi­ cation of the Selected Works of Walter Rudolf Hess. Although English translation of several of his monographs have appeared, none of his orig­ inal papers has ever been published in the English language. During his sci­ entific career, Hess made pioneering contributions in the field of hemo­ dynamics, pyhsiological optics, oculomotor diagnostics, regulation of cir­ culation, respiration and temperature, and finally on the somatomotor, vis­ ceral, and emotional functions of the diencephalon. His concepts concern­ ing organization and order in physiology and his views on the important role of the vegetative nervous system in regulating the activity of the central ner­ vous system are of great interest to science and medicine and were in many respects far in advance of his time. These concepts continue a line of thought which was upheld by such famous physiologists as Xavier Bichat, Claude Bernard, and Walter B. Cannon. Indeed, Walter Rudolf Hess has become one of the rare figures in the recent history of physiology willing to carry out an integrative analysis of bodily functions and to search for the basic principles of regulation and interaction between regulatory systems. In fact, he anticipated such ideas in biology as feedback control and ser­ vomechanisms long before these notions evolved in the field of engineering and electronics.