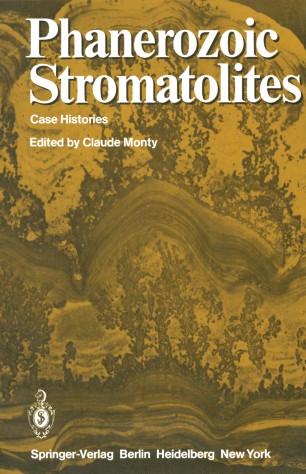 During the 2nd International Symposium on Fossil Algae, organized by the University P. & M. Curie, Paris, in April 1979, a special session was devoted to stromatolites; 29 papers were presented in French, English, or Russian. Among the papers selected originally, 16 were carried out to the final stage by their authors. They are presented here in their stratigraphical order. This selection does not pretend to cover the problem of Phanerozoic stromatolites in its entirety, but relates case histories. This should be the seed for further books analyzing and illus­ trating the paleoecology, the niche and the features of Phanerozoic stromatolites, namely throughout the Mesozoic and the Paleozoic, where the data are still scarce; this will lead to naturalistic views on the evolutionary features of Post Riphean stromes, and will sharpen tools to interpret their Precambrian ancestors. Let me introduce the papers. CLAUDE L. V. MONTY formalizes two basic types of crypt algal micro­ structures: the spongiostromate and the porostromate microstructures respectively; the rise of the latter around the Precambrian/Cambrian boundary represents a very significant step in the evolution of cyano­ bacterial microstructures and in their interaction with the environment. K. K. VERMA and G. BARMAN present a lower Phanerozoic stroma­ tolitic assemblage from Rajasthan associated with paralic alluvial fans fed by block faulting. Main stromatolite developments occurred during periods of low sedimentation and negligable tectonics, and formed in very shallow marine water. J.