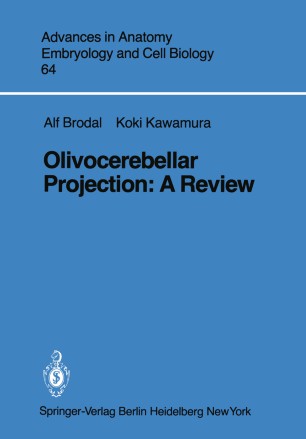 In recent years the inferior olive and its projection to the cerebellum have attracted considerable interest. Numerous experimental anatomic and electrophysiologic studies have been undertaken, and much new information has been brought forward. Many apparently discordant observations have been reported however, and on many points the data obtained by the use of different methbds and approaches appear to be diffi­ cult to reconcile. Much of the interest in the olivocerebellar projection concerns the topographical localization within the projection. Particularly as a result of research in recent years the pattern of localization has turned out to be far more complex than previously be­ lieved. It was found useful, therefore, to attempt a review of the subject in the hope that a critical analysis of available observations might make it possible to obtain an integrated picture of the olivocerebellar projection and perhaps fmd some basic principles in the organization of this fiber system. As will be seen, our attempt has been only partly successful. There are still riddles that remain to be solved. In the present review attention will be focused on problems related to the locali­ zation within the olivocerebellar projection, particularly its anatomic aspects. An extensive review of the physiology of the inferior olive has been published recently by Armstrong (1974), who considers some anatomicophysiologic correlations as well. Physiologic fmdings will be referred to here mainly in relation to our main theme.