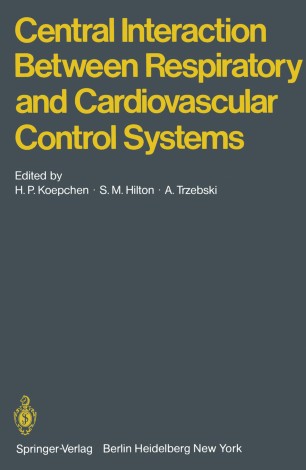 This book presents the proceedings of a satellite symposium of the XXVllth International Congress of IUPS held in Berlin, July 12-15, 1977 the latest of a series of meetings dealing with the organization of the autonomic nervous system, especially its central nervous control (Warsaw 1971, Tokyo 1974, Heidelberg 1976). This was an occasion for the discussion of the rapidly increasing experience of laboratories and research groups in a number of countries. Interest is growing in the organization of the sympathetic and parasympathetic nerve supplies, and there is much new material derived largely from single unit re­ cordings within both central and peripheral nervous structures. It has long been known that various rhythms originating in central ner­ vous structures, including the respiratory rhythm, are reflected in autonomic outflows. Moreover, the autonomic responses themselves rarely appear in isolation, and are usually seen as part of patterns of change involving a number of organs and systems. These facts alone imply com­ plex interactions within the central nervous system, which indicate that studies of relationships between the relevant inputs, intrinsic central nervous activity and autonomic outputs constitute a special branch of neurophysiology which needs to be developed in order to gain insights into the forms of central nervous organization which are in­ volved.