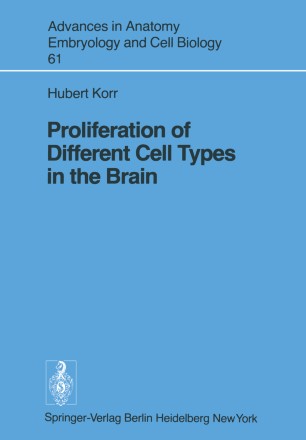 Proliferation of Different Cell Types in the Brain

Studies on cell kinetics in untreated animals have for the most part been done on or­ gans in which many proliferating cells can be found. In general the proliferating cells have been identified either in histologic sections as mitoses or by autoradiography as labeled interphase cells following the injection of a labeled precursor of DNA, such as 3H_ or 14C-thymidine (TdR). A great many proliferating cells can be observed in the rat and mouse brain during the embryonic period and for a short time after birth, and many studies on cell kinetics have been performed for this phase of life. By contrast, very few proliferating cells are found in the brain of adult rodents (except for the subependymallayer, see below). As a result, only isolated studies have been done on cell kinetics during this period. Al­ though there is an increase in proliferating cells in adult animals which had been pre­ treated (e g. , by wounding, X-irradiation, viral infection, withdrawal of water), this proliferation too has not been investigated in detail. A number of studies have been done since 1959 on the proliferation of cells in the sub­ ependymal layer of the lateral ventricles of the forebrain. This cell type is well suited for such investigations because mitoses can be found there even in animals which are quite old. Since the studies ofLe blond and co-workers (Walker and Leblond 1958 ;Messier et al.