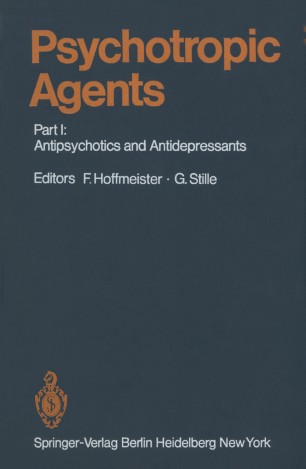 Part I: Antipsychotics and Antidepressants

The volumes on "psychotropic substances" in the Handbook of Experimental Phar­ macology series clearly show that the classical concept of this discipline has become too narrow in recent years. For instance, what substances are psychotropic is determined not by the criteria of the animal trial, i.e. by experimental pharmacology, but by their action on the psy­ che, which in the final analysis is only accessible to us in man. Psychotropic substances force experimental pharmacology (and thus also this Handbook) outside its tradition­ allimits, which have essentially depended on animal studies. The antipsychotics and antidepressants were not discovered in animal ex­ periments, but by chance (or more precisely, by clinical empiricism). Experienced psy­ chiatrists trained in the observation of patients recognised the efficacy of drugs, the beneficial effect of which nobody had dreamed of before: DELAY and DENICKER in the case of chlorpormazine, KLINE in the case of the monoamine oxidase inhibitors and KUHN in the case of imipramine. It was only after these discoveries that the pharma­ cologists developed experimental models of the psychoses in animal experiments. However, even today we still do not know with certainty which of the effects shown in animals is relevant for the clinical effect despite the vast abundance of individual investigations. For many years, this uncertainty led to the testing of antipsychotics (e.g. of the neuroleptic type) in models which actually produced the undesired effects.