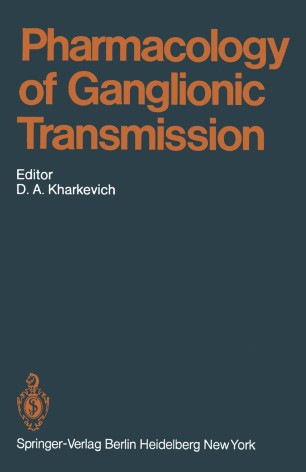 D.A. KHARKEVICH The history of the study of ganglionic substances begins with the paper of LANGLEY and DICKINSON (1889), who established the ability of nicotine to block the neurones in the superior cervical ganglion. This was a considerable discovery as the authors ascertained that impulses were transmitted from pre- to postganglionic neurones in the autonomic ganglia. Simultaneously they indicated the possibility of pharmaco­ logical influence upon interneuronal transmission in autonomic ganglia. The idea of ganglionic receptors specifically sensitive to nicotine followed logically. Later, LANGLEY (1905, 1906) considered the problem of receptors with respect to neuro-effector synapses. It is remarkable that he was one of the first to put forward the theory of chemical mediation of excitation (" ... the nervous impulse should not pass from nerve to muscle by an electric discharge, but by the secretion of a special substance at the end of the nerve": LANGLEY, 1906, p. 183). In addition, LANGLEY JOHN N. LANGLEY (1852-1926) D.A. KHARKEVICH 2 and his collaborators managed to define the topography of autonomic ganglia more precisely by means of nicotine. It should be mentioned that it was he who introduced the terms "autonomic nervous system" and "parasympathetic nervous system".