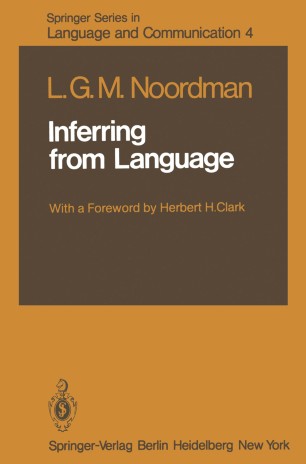 Part of the Springer Series in Language and Communication book series (SSLAN, volume 4)

In the study of human thought there could hardly be a more fundamental con­ cern than language and reasoning. In the tradition of Western philosophy, humans are distinguished by their ability to speak and to think rationally. And language is often considered a prerequisite for rational thought. If psycholoQists, then, are ever to discover what is truly human about their species, they will have to discover how language is produced and understood, and how it plays a role in reasoning and other forms of rational thought. Within psychology there has been an imperative to study language and rea­ soning together. Since Wundt, psychologists have succeeded in building a the­ oretical foundation for both language and reasoning. What has become clear from these beginnings is that the two are inextricably bound to each other. Like the two players ina chess game, take away one of them and the game no longer exists. On the one hand, producing and understanding speech re­ quires an intricate process of reasoning. Speakers must rationally choose sentences that will affect their listeners in ways they intend, and listen­ ers must infer what speakers could conceivably have meant in selecting the sentences they did. Reasoning, inference, and rational thought lie at the very center of speaking and listening. On the other hand, logical reasoning begins with, and is influenced by, the language in which a problem is stated.