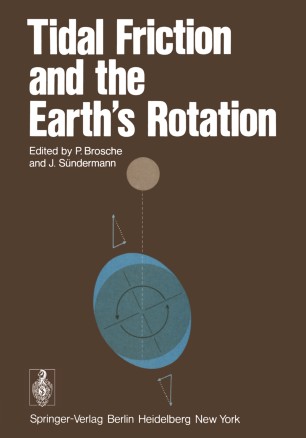 Tidal Friction and the Earth’s Rotation

P.Brosche The development of the ideas and observational techniques related to the subject of our meeting "Tidal friction and the Earth's rotation", Bielefeld, September 1977 is one of the most fascinating books - not merely chapters! - of the modern history of science. Its genealogical tree is as intricate as that of mankind itself: There are dead ends and superfluous re-discoveries. Due to these circumstances and to the pure extent of the topic, it is impossible to give more than a few highlights here. The first relevant observational fact was discovered by the famous English astronomer E. Halley in 1695 (Berry, 1961). He simply could not arrive at an agreement between ancient and recent eclipses using a constant mean angular motion of the Moon. Instead, he had to intro­ duce an empirical acceleration term in the mean motion. Known as the "secular acceleration", it has ever since been a most challenging sub­ ject of celestial mechanics and a main branch of the genealogical tree already mentioned. In 1754, completely independently and almost certainly in ignorance of those specialists' activities, the German philosopher Kant established the idea of tidal friction as a decelerating mechanism for the rotation of the Earth (Felber, 1974). Although he made some errors in his rough computations, the majority of the constitutive elements of his concept have survived to the present day (Brosche, 1977).