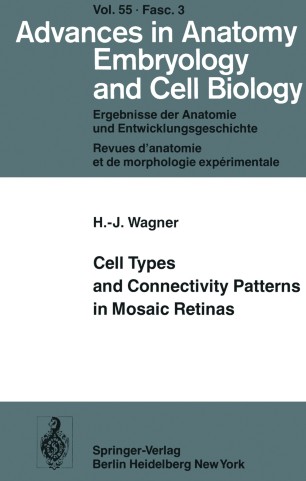 In many parts of vertebrate and invertebrate central nervous systems, groups of nerve or receptor cells can be found that are arranged and connected according to a precise, functionally defined pattern (Braitenberg, 1973; Santini, 1975; Strausfeld, 1976; Chan-Palay, 1977). In these cases, groups of cell bodies or synapses appear as basically similar configurations, which, however, are different in detail from each other. Such abstract patterns of connectivity are of a statistical nature and do not allow, in a given example, for the prediction of the localization or connections of a particular cell. "Wiring diagrams", therefore, can be obtained only from a multitude of individual observations. In contrast, in several sensory organs, concrete patterns occur that con­ sist of a regular, mosaic-like, and geometric arrangement of similar cell types. The constancy of such a mosaic allows predictions about certain units of the pattern on the basis of only a few exemplary observations. Typical examples are found in the visual system: In the compound eye of insects, each ommatidium contains a definite number of visual cells that are grouped around the optical axis in a hexogonal array (Kirsch­ feld, 1967); in the vertebrate retina, mosaics of geometrically arranged cones are found most frequently in lower vertebrates; they are common among teleosts. A number of studies have dealt with their phylogenetic significance and their functional role as adaptation to specific environments or modes of feeding.