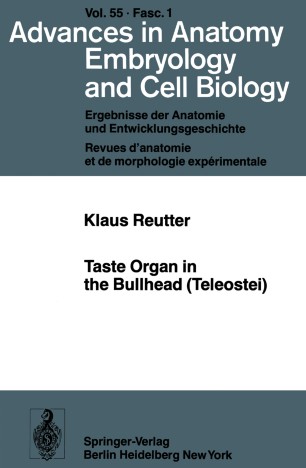 Taste Organ in the Bullhead (Teleostei)

In fish, the sense of taste is extraordinarily highly developed and essentially more sensitive than that of mammals. This is due to chemoreception, which offers suf­ ficient possibilities for animals living in water to orient and maintain themselves suc­ cessfully in individual and social life. Therefore, at least within the vertebrates the chemical senses have developed to their highest standard in water. Chemoreception is evidently present in land-dwelling mammals and is still dependent on moist surfaces, but the optical sense, in its highest stage of development, takes priority. In contrast, in aquatic animals vision generally plays only a subordinate role (c. f. Grant & Mackie, 1974). Although the high sensitivity of the sense of taste in fish has been extensively shown in physiological experiments, corresponding detailed morphological data are lacking. Due to their similarity the taste organs of fish and mammals have been regard­ ed equally or rather the results taken from fish have been interpreted on the basis of the known morphology of the mammalian taste bud (TB). However, the high efficien­ cy of the sense of taste in fish requires a corresponding morphological basis, and mor­ phological and histochemical particularities can indeed be cited as examples: firstly, TB in fish are not only located in the mouth and throat area, but in many species also in the outer skin of the body.