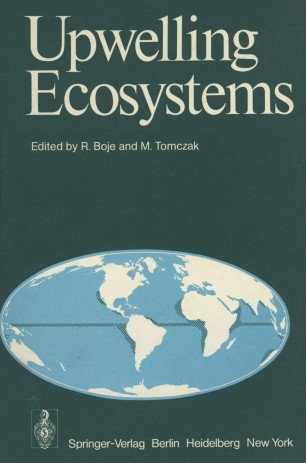 Upwelling areas are among the most fertile regions of the ocean. In principle, upwelling is caused by the divergence of the flow in the surface layer of the ocean which arises as a consequence of a particular wind field, the presence of a coastline, or other special conditions. Since deeper oceanic layers are usually enriched wi th nutrients, it is the permanent supply of nutrients which forms the basis for the high producti vi ty of upwelling reg ions. The study of upwelling and its consequences were, for a long time, the task of individual scientists from all disciplines of marine science. Today, it is perhaps the branch of oceanography where interdisciplinary coopera­ tion has developed best. Becoming aware of the large potential yield of upwelling regions, governments in­ creased the funds for upwelling research. With research activities developed on a larger scale, interdisciplin­ ary cooperation became a necessity. On the international level, several symposia documented the rapid development. Three volumes reflect the results of these scientific meetings (Rapp. Proc.-Verb. 159, 1970; Inv. Pesq. 35, 1, 1971; Tethys §.' 1-2, 1974). The present book contains selected papers from the Third Symposium on Upwelling Ecosystems, which was held in Kiel in September 1975. Although the third of a series of meetings, it was the first where the word "ecosystem" stood in the title for a scientific program.