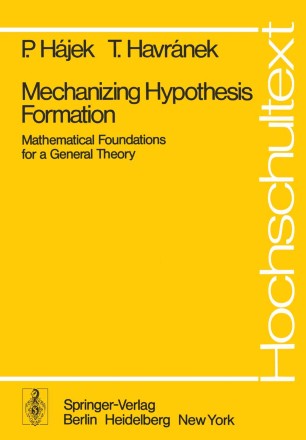 Mathematical Foundations for a General Theory

Hypothesis formation is known as one of the branches of Artificial Intelligence, The general question of Artificial IntelligencE' ,"Can computers think?" is specified to the question ,"Can computers formulate and justify hypotheses?" Various attempts have been made to answer the latter question positively. The present book is one such attempt. Our aim is not to formalize and mechanize the whole domain of inductive reasoning. Our ultimate question is: Can computers formulate and justify scientific hypotheses? Can they comprehend empirical data and process them rationally, using the apparatus of modern mathematical logic and statistics to try to produce a rational image of the observed empirical world? Theories of hypothesis formation are sometimes called logics of discovery. Plotkin divides a logic of discovery into a logic of induction: studying the notion of justification of a hypothesis, and a logic of suggestion: studying methods of suggesting reasonable hypotheses. We use this division for the organization of the present book: Chapter I is introductory and explains the subject of our logic of discovery. The rest falls into two parts: Part A - a logic of induction, and Part B - a logic of suggestion.